Our canine best friends share a lot with us – we often let them sleep in our beds, take them with us when we go out and even give them clothes that match our outfits! But one area where we may not be able to share everything is our food.

Many of our dogs are incredibly adept at begging for food. When they turn on the charm and look at us with pleading eyes, most dog owners will be hard-pressed to say no. However, it’s important that we don’t give our dogs human food that can be harmful to them.

Australian dog breeders recommend not giving them treats from the dinner table altogether, as they can start to prefer eating your table scraps instead of their actual food. It works better to give them treats especially made for them.

However, dogs are curious animals and are skilled at finding food that they think smells interesting. We’ve heard of some particularly talented pooches being able to open cupboards or refrigerators.

What Do I Do if My Dog Eats Something Toxic?

It’s a good idea to know the phone number for your local animal poison control (if any), as well as your veterinarian’s emergency hotline. Having these contacts on-hand when your dog ingests something toxic can potentially save their life. Apart from that, learn the common symptoms of food poisoning in dogs:

Contact your veterinarian or animal poison control immediately if your dog shows these symptoms and you think they may have ingested any of the following foods.

Plants of the Allium genus are often toxic to dogs. This includes onions, garlic, leeks, and chives. These plants contain sulfoxides and disulfides that can damage red blood cells in high enough quantities, causing anaemia in dogs.

Even in smaller quantities, it can cause severe digestive system upset, including diarrhoea and vomiting. Concentrated forms, such as garlic or onion powder, are especially potent and only require a small amount to cause symptoms.

This is a major concern because many human foods contain garlic and onion in some form. Check the ingredient labels before giving any canned or processed food to your dog, as the garlic and onion may be minced so finely that they are indistinguishable from the rest of the food.

This is an ingredient that you won’t give to your dog on its own, but can be found in many human treats. Xylitol is an artificial sweetener, and is a common ingredient in candies, gums and chocolates.

While we humans can consume it with zero ill effects, it can be incredibly toxic to dogs. Depending on the size of the dog, as few as a couple of pieces of gum containing xylitol can cause hypoglycemia and liver failure.

The key with ingestion of Xylitol is early intervention, as the detrimental effects can begin within 12 hours.

Most dog owners will already know that chocolate is on the list of foods to never give to your dog. Theobromine, which is found in all forms of chocolate, is incredibly toxic to our dogs and can cause dangerously high heart rates and seizures. The caffeine in chocolate can also severely disrupt a dog’s metabolism, compounding the danger.

Even just a little bit of chocolate, chocolate milk, especially dark chocolate, can cause a dog to vomit and have diarrhoea. Large quantities can be fatal if left untreated. While some dogs may be more resistant to the effects of chocolate, it’s best to simply not risk it.

This one is a bit of a mystery. Experts aren’t quite sure what causes grapes (and raisins) to be so toxic to dogs. Some dogs can eat entire bunches of grapes and be fine, while others may only eat a single seed and develop symptoms of food poisoning.

In severe cases, grapes can end up causing kidney failure in canines. Like with chocolate, it’s best to simply not risk it and keep grapes well away from your pooch.

The main issue with these drinks is the caffeine content. As with chocolate, the caffeine found in coffee and other drinks such as tea and soda can cause raised heart rate, hyperactivity and seizures.

It’s almost always better to give your pooch natural dog treats with a named meat source instead of giving them human food from the table. While some dogs may develop chicken allergies or other forms of food sensitivities to protein sources, the symptoms are mild and generally manageable.

This is in stark comparison to the dramatic effects that can happen if your dog ingests any of the foods in the above list. So play it safe and give your dog only natural dog treats made especially for them – it’s safer for them and in many cases, tastier as well.

Switching dog food is quite common; most dog owners will do this as their pups grow older. However, it’s essential to note that these transitions

Is your dog struggling with itchiness or a chronically upset gut? Or has your vet recommended exploring novel protein diets to tackle food allergies? It’s

How To Use Positive Reinforcement To Reward A Dog (6 Tips)

Are Grapes Toxic To Dogs? The Truth

As a dog owner, your main goal is to keep your dog healthy and happy. You ensure that it gets the life it deserves. One 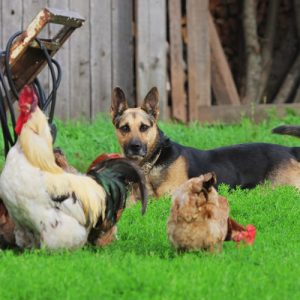 A Basic Guide to Chicken Allergies in Dogs

Our canine BFFs are more similar to us than one might think, and one of those similarities is a sensitivity to certain foods. Dogs with Our canine best friends share a lot with us – we often let them sleep in our beds, take them with us when we go